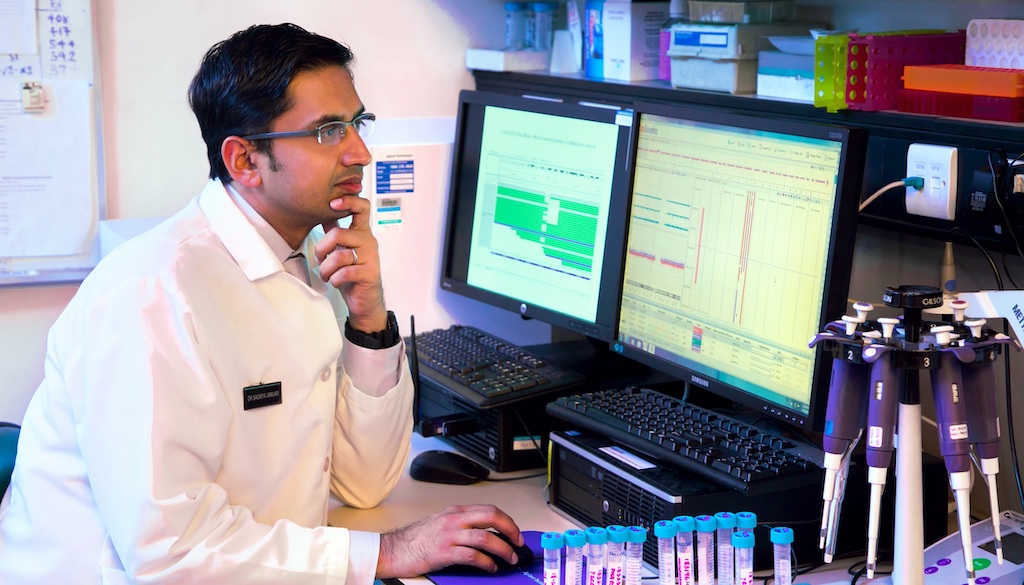 Clinicians like Saumya Jamuar are laying the groundwork to harness the diagnostic potential of genomic sequencing technology to improve the lives of children with rare diseases. (Photo Credit: KK Women’s and Children’s Hospital )

The beginnings of cardiac surgery in the mid-twentieth century would see a child with a hole in his heart sent home untreated because it was deemed too dangerous to operate on him safely. Today, a minimally invasive procedure is all that is needed to close the hole.

Saumya Jamuar, a senior consultant and clinical geneticist at KK Women’s and Children’s Hospital (KKH), sees parallels between the early days of cardiac surgery and the field of genetics today. Thanks to decades of advances in genomic sequencing technology, clinicians like Jamuar are becoming better at diagnosing children with rare diseases, and can even begin to focus on the next step: finding more targeted ways to treat them.

Jamuar holds concurrent roles as Clinical Director of Institute of Precision Medicine (PRISM) and Head of the Genomic Medicine Centre, both under the SingHealth Duke-NUS Academic Medical Centre. He is also the Principal Investigator pf the Singapore Childhood Undiagnosed Disease Program, Bringing Research Innovations in Diagnosis of Genetic Diseases in Singapore (BRIDGES). In this interview, he shares his journey into the burgeoning field of genomic medicine and his views on its future.

Why did you become a paediatric geneticist?

Growing up, I loved solving jigsaw puzzles, putting seemingly unrelated pieces together to build a complete picture. The beauty of that was always very enthralling and captivating to me. In medical school, I was fascinated by the tenacity of young children, their ability to cope with illness and their positive energy, all of which drew me to paediatrics. As a paediatrician, I saw the anguish of parents of children with undiagnosed genetic disorders. Specialising in Genetics gave me the opportunity to provide them with the answer, solve the puzzle and provide parents with a more complete picture.

Can you share the key aims of PRISM and some of the biggest challenges you’ve faced in setting it up?

In 2016, before the National Precision Medicine program was established, there wasn’t enough local genomics data and we didn’t know what ‘normal’ data for Asians looked like. Professor Patrick Tan, Director of PRISM, thus started PRISM with two aims. The first was to generate this normative data for the Asian individual. The second was—on the assumption that genomics will become integral to routine clinical care—to jumpstart and put in place a clinical sandbox, where we can explore how genetics can be integrated into standard clinical care.

What is your vision for Precision Medicine in the clinics as well as paediatric care in Singapore?

In paediatric genetics, we are getting better at making diagnoses, but still lagging in treating patients. I am hoping that we are able to leverage new technologies to accelerate how we develop therapies in the coming decades. Some of these technologies are mRNA-based therapeutics—which have been accelerated because of the COVID-19 vaccine—CRISPR-Cas9 gene editing and novel antisense oligonucleotide therapies that build a ‘blocker’ for toxic mRNA. However, there are many issues that need to be addressed before we can translate these novel therapies into the clinic.

On the local front, KKH has established a program called BRIDGES to bring together a network of rare disease clinicians and scientists. Patients and clinicians can be paired with researchers who are doing cutting edge therapeutic research to bring the benefits directly to the patient. When it started in 2014, the program focused on diagnostics but now we are expanding into therapeutics.

You have a syndrome—Jamuar Syndrome—named after you. How did this come about?

In 2015, a family came into my clinic for evaluation. They had two girls who had various developmental issues: they walked slower than other children, were not talking and had seizures. They had some basic tests done, but none could tell us more, so we enrolled them in BRIDGES. At the Agency for Science, Technology and Research (A*STAR) Institute of Medical Biology, we discovered that the girls had a new mutation in a gene called UGDH, which is basically an instruction manual for a scaffold protein for brain cells (i.e. neurons). That scaffold was missing, which caused the brain cells to become disorganised and dysfunctional. This in turn led to developmental delays, epilepsy and speech impairment.

We have since identified many more families with this syndrome, but because of my role in identifying the first two cases, the syndrome was named after me. It is an honour, but the name itself is not important. What’s more important is the fact that we actually managed to find the answer, which then allowed us to say, “How do we treat these children better now that we know that it is a scaffold that is missing?” We can’t put that scaffold back, but can we do something else that can help them?